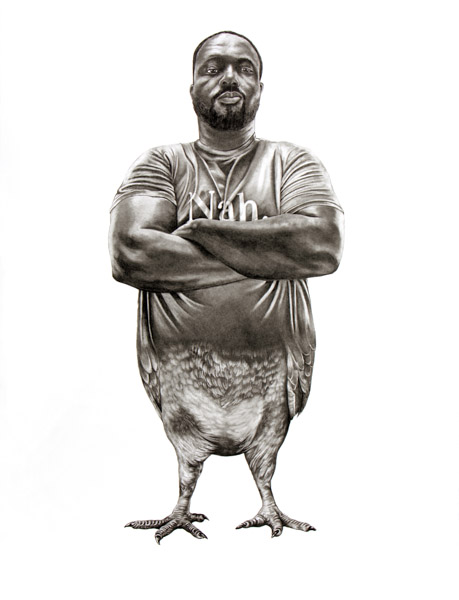 A billboard, at the corner of Woodward and Canfield will display a work by one artist, per month through next spring for “In the Air: Voices From Detroit and Beyond.” According to the exhibit website, the series features works by eight local and national artists “in response to the global pandemic and racial injustice.”

This month’s billboard, “Resting in Black,” was created by former Free Press deputy director of photo and video and locally based Kresge Artist Fellow Rashaun Rucker, whose drawings and prints make socially conscious commentary on the Black experience in America. The Detroit billboard features two black men, shoulder-to-shoulder, weighed down by worry. 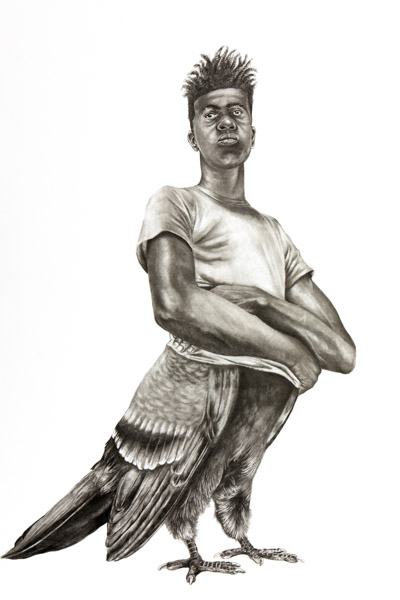 “Black people never have the ability to rest, even in our so-called restful moments,” said Rucker, a recipient of the prestigious Kresge Artist Fellowship. “We’re always living in what I call this ‘between space,’ the constant struggle between what we want to be, and what other people want us to be. The struggle is, do you live in that space, or do you (find a way to) make a space for yourself where you can live in your fullness?

“Say a Black man wants to buy a Mercedes,” he said. “You automatically start thinking (things) like, ‘Am I going to get pulled over for driving a car like this?’ Things like that are always hanging on you. … I wanted the piece to reflect resting in Black, and trying to be our full selves.”

A North Carolina native, Rucker moved to Detroit 17 years ago when he was hired as a photographer by the Free Press. The award-winning journalist left the newspaper last year to focus on his art full time, but his vast media experience continues to inform his current work.

“I’m a storyteller at heart,” said Rucker, whose work is also on display at the Wallach Art Gallery (Uptown Triennial 2020) of Columbia University.

Many of Rucker’s pieces involve birds, a theme inspired by conditioning and Black men, he says. 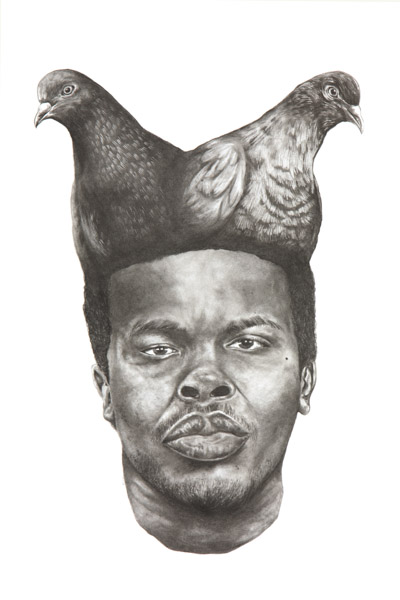 “Coming from photojournalism, research is also something that’s big for me,” he said, “and I learned pigeons are not native to America, and they’re one of the few birds that don’t migrate. They originated in Europe, Africa, Asia … We’re accustomed to seeing them all the time, but they’re not native. They were brought here, and now they’re stuck.

“The whole purpose of migration is to transition to a better environment,” he continued. “But they can’t do that, which creates what I call ‘psychological redlining.’

“We think of birds as symbols of freedom, but the pigeons don’t know they can leave. There are people in Detroit who don’t go to the other side of town, don’t go to this or that place, because they believe they don’t belong there. But who says so? It’s just the conditioning.”

“White people brought Black people here, and they got what they wanted. Once that was done, and there was no longer any use for us, they detested us. So, for me the pigeons in my pieces are about, ‘What do you do with something when it’s no longer wanted?’”

A series of Rucker’s pigeon-themed paintings are currently on display in “Contemplation of Flight,” a sold-out solo exhibition at Miami’s N’Namdi Contemporary gallery. An artist’s discussion video can be viewed on the gallery’s Instagram page.

Rucker now looks ahead to a 2021 exhibition about his native North Carolina —the show titled “Up from the Red Clay” will be held at M Contemporary Art in Ferndale and is inspired by his family and his time growing up there — followed by a fall ’21 artist residency at the University of Michigan, in their Institute for the Humanities.

“I want to teach,” he said, “preferably at a small or historically black college. What good is this knowledge if I can’t put it back into the community? That’s my endgame: finding the next me and making it a little easier for them.”

“We couldn’t have in-person exhibitions due to COVID-19,” said curator Tom Pyrzewski, “so we were doing them online at waynestategalleries.org, but we wanted to showcase work in person somehow.

“Billboards are typically used for advertising, but we thought it was an interesting way to serve our mission in a different context. Rashaun’s work is a wood block print, which you’d typically see on a wall; some of the other featured pieces are paintings, and the first one was poetry and graphic design. Being able to see fine art on a billboard, and deliver that to the community where anyone can access and enjoy it, has turned out to be very fun, and we’ve gotten a lot of great feedback.”

Rucker’s “Resting in Black” will be on display until Saturday; a piece by Peter Williams will appear on the billboard in early December. is made possible with the support of Kresge Arts in Detroit, in partnership with Wayne State’ Department of Art and Art History.

Coming to the Motor City from Dayton, Ohio, Duante Beddingfield is the new arts and culture reporter at the Detroit Free Press. He can be reached at dbeddingfield@freepress.com.