Patrick Quarm – Paradox: Surfaces of Self 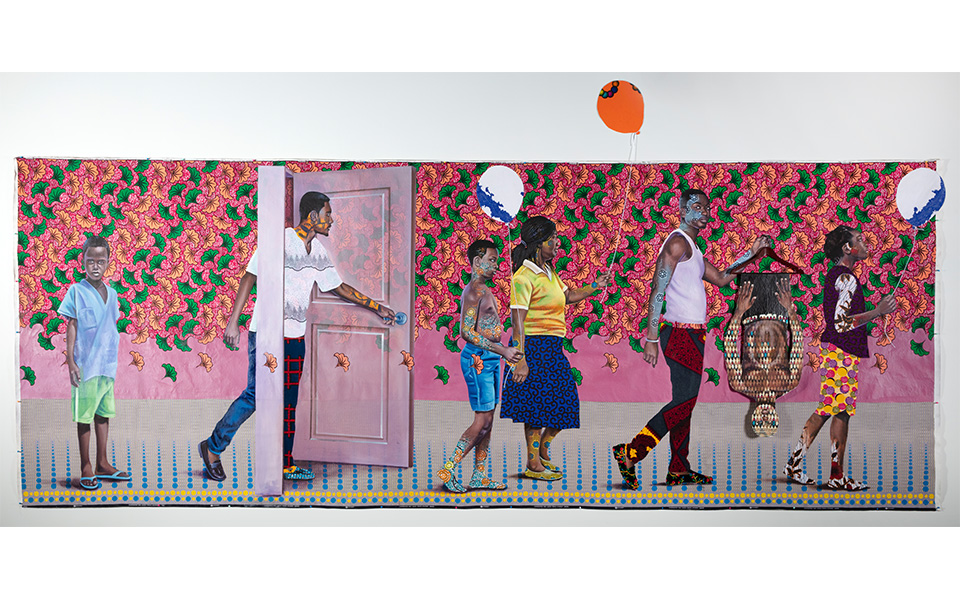 Patrick Quarm’s exhibition “Paradox: Surfaces of Self” at N’Namdi Contemporary Art’s new Little Haiti space presents nine new works by the artist focusing on cultural hybridity, identity construction and its fluidity, and the interconnectedness of past, present and future.

Born in Sekondi, Ghana in 1988, Quarm currently lives and practices in the United States. He graduated from Kwame Nkrumah University of Science and Technology, Ghana with a BFA in Painting and a Masters of Fine Art degree at Texas Tech University; his work has been showcased at K.N.U.S.T Museum Kumasi, Ghana; Peckham International Art Fair (PIAF), London, England; and the Caviel Museum of African American History, Lubbock, Texas, amongst others. He has also served as a teaching assistant and Adjunct Professor for painting and drawing courses in both Kwame Nkrumah University of Science and Technology and Texas Tech University. 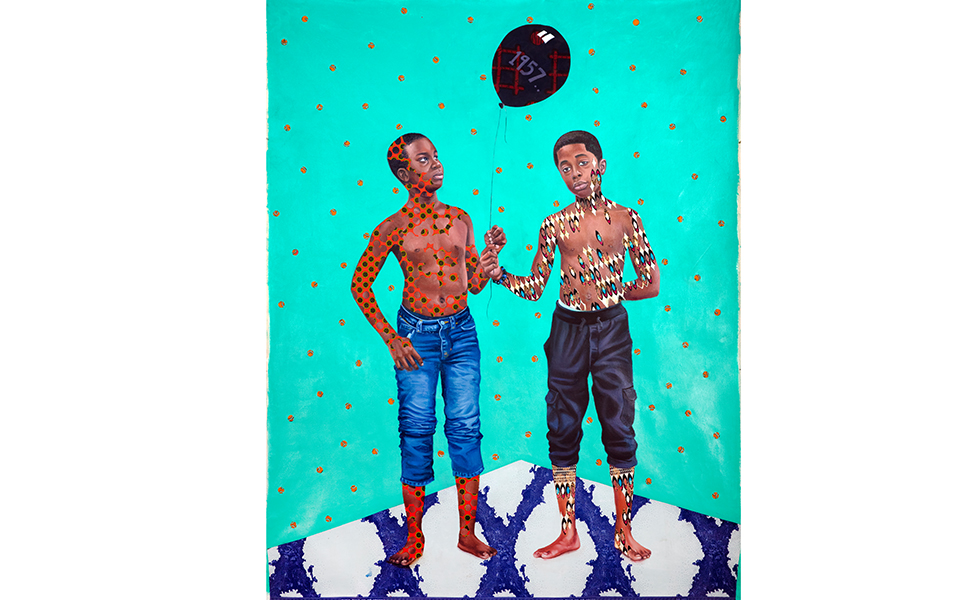 Since moving to the United States, Quarm has started to artistically explore his identity-transformation and shifts he experienced once living in a new cultural environment, which has essentially become a path of self-discovery for the artist. Inspired by his own colonial past, post-colonial identity, the collision of cultures in present day Ghana, as well as his experiences of creating a new hybrid cultural identity that merges Ghanaian and Western cultures, Quarm’s works present a continuity of his own experiences, stretching past his family and friends into larger narratives that inform a contemporary artistic dialogue on post-migration identity, cultural hybridity and the image of Africa and people of African descent in the West.

The language Quarm employs is hybrid as well: The artist merges and simultaneously juxtaposes a traditional Western style of painting with African print fabrics that are metaphorically woven through his works, reflecting on post-migration identity. The paintings contain remnants of the past, and personal and cultural histories-strong markers of identity, that merge into what the artist refers to as “Third Space” or live side by side with newfound cultural traits. He deliberately leaves conceptual space for moments when either side may take precedence-pending social space-and he leaves space for evolution and continuity. Identity is in flux and it evolves with age, locations, political climate and socio-cultural context. How does living in the United States in 2019 alter perception of “African-ness” by Africans as well as Westerners? The perception of immigration and immigrants, of self-identification of any person of color? There are no definitives and the shifts need to be allowed to enter into the work and larger conversations around it. 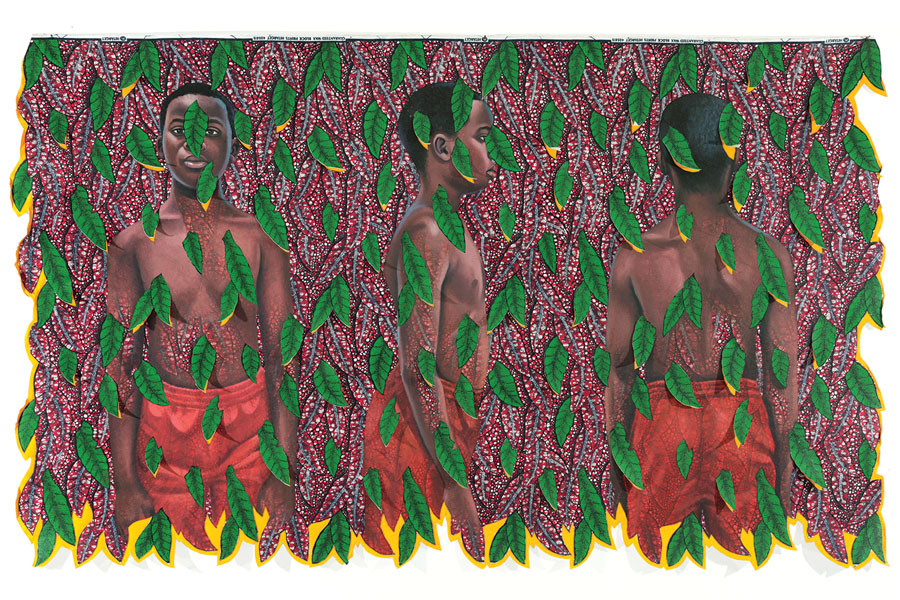 Central to Quarm’s portraits are the people whose identities he investigates, representing for many others with shared experiences. The viewer’s context and own story most certainly alters their stories and Quarm invites this alteration in various ways-with cut outs and collage-components, depth-creating layers with literal spaces for the insertion of the viewer in Bortey, providing space for someone to stand in between two layers and look out through various holes for partial views and a uniquely altered point of view overall. As if using an oversized hole punch, Quarm rips deliberate and clearly shaped windows into histories and identities that excavate hidden stories, showing remnants of the past needed to understand the present and move into the future with a sense of what came before that shaped us. The viewer is allowed in to share their own story with the protagonist/s of each painting. How they relate may differ, and the view of the work, of identity and history may become partial, irrevocably altered, or more complete. The outcome depends on the viewer and not the artist. Quarm presents works that he wants to “stimulate a new understanding and create a form of enlightenment.”

In the nine works presented at N’Namdi Contemporary (coincidentally or not, Quarm is also one of nine siblings), Quarm shares his family as well as friends and acquaintances as part of his in depth investigations. Each protagonist claims the central space in their own narrative with agency.

Lineage, history and time play an important role in Quarm’s work. Past, present and future are a continuous thread in his work, whether by painting generations from children to adults in separate painting, or in one, like the portrait of the N’Namdis (the first time the artist has ever painted an African-American family), or through his cut outs that allow for historical excavations and glimpses of the past with space for future evolution and growth, to the recurring central references of cultural identity in the use of African fabric.

In many instances like in Bortey, Blinkard, and Protagonist Quarm decides to let the central Black protagonist be relaxed, or “just be,” which raises many questions for deliberation on whether this is possible when looking at the depictions of immigrants forging hybrid cultures in the United States and across the world in 2019. Could these paintings, faces and stories be non-political? Is it possible to create contemporary art as an African immigrant artist, and a man of color in the USA today that affords such luxury? Is there a need for the works to indeed be political and socially aware of the times? Can they be understood without the current context in which they are presented? 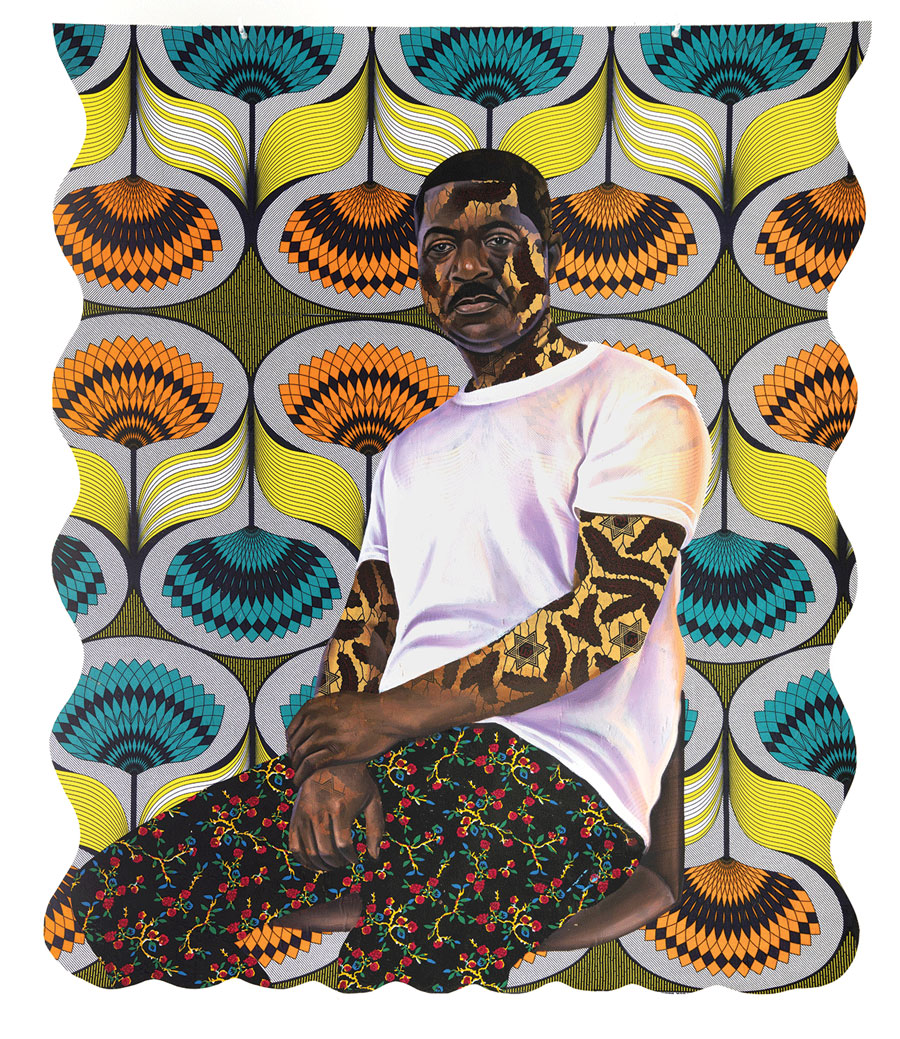 How does identity get adjusted post-migration from Africa to the Americas today? How has this changed over the past four years even? Quarm’s portraiture claims agency not just through the individual protagonists and their centrality in the paintings, but for a re-writing or re-painting of the image of the black body, which has historically been distorted. Colonial and Eurocentric depictions had and still have wide-ranging repercussions as the image was never presented in isolation but rather with an agenda-the deliberate narrative of the colonizer-insinuating correlations between physical features and intellect, capabilities and even humanity. Quarm’s representation of the modern African in Africa or across the Diaspora in paintings such as Making of Modern reclaims the right to define from within rather than to wait on any outsiders to bestow meaning and create a definition and narrative.

As part of that self-definition, the bodies of Quarms’s protagonists are partially covered in African fabric. The bold patterns curse through their veins like the blood of their ancestors informing their contemporary identities. They cover parts of their bodies like tattoos or scarification marks that inscribe them in more ways than one with who they are and who came before them. The bodies are literally wrapped in history and culture. Quarm weaves strips of fabric across his work, interwoven with the threads of the past. Yet, what represents the African heritage is itself a representation of that past, of colonialism and world history. The west-African fabric the artist imports from Ghana- selected together with his brother-is known as Ankara or Dutch Wax, which originated in Indonesia during the Dutch colonization. The fabric was created in the 1850s and introduced to West Africa in the 1880s after failing to successfully be sold on the Indonesia market. Across West Africa, it was claimed by the people even if not authentically African in origin. With time, the prints began to reflect African heritage and became more and more connected to a shared visual language of the people wearing it. 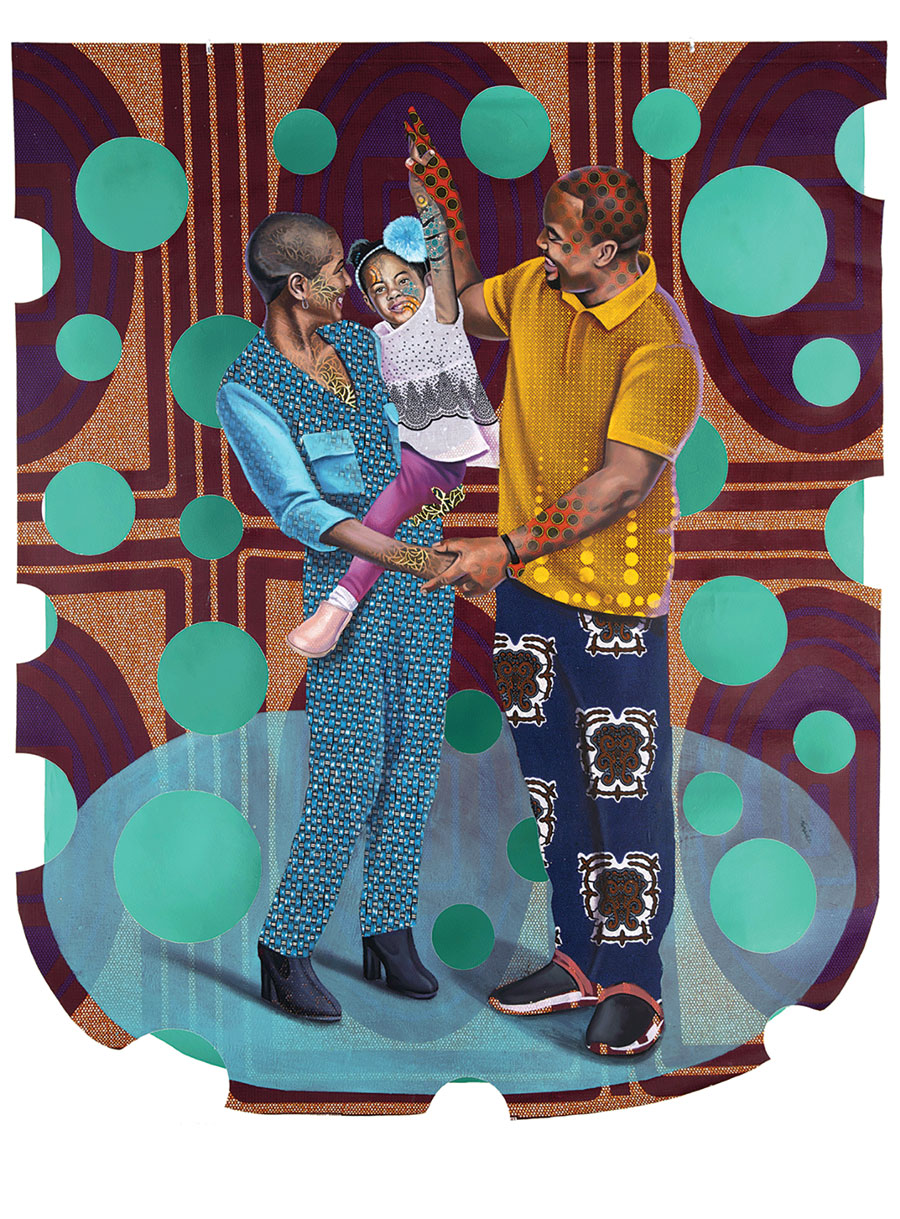 The fabric, much like the dots and circular shapes that can be found throughout Quarm’s paintings, represent layers of identity, history and sedimentation. The metaphorical partial application of African fabric creates connections, and the cutouts offer glimpses into the past. Quarm applies large spots or color to cover parts of that past, bringing the protagonists’ identities into the present and future-where a new generation may have lost their mother tongue and added a layer of American-ness-and create an abstract composition of new cultural hybridity. This third space continues to evolve as new generations walk through the door-whether welcome or not-and claim new contemporary identities that are African, and American, and whatever else they want to claim that lays in between or beyond. Their identities, now defined solely by themselves, are shedding notions created by others, thereby moving through social evolutionary stages to emerge as new contemporary hybrid selves transcending all social structures.

Heike Dempster is a writer, photographer and communications consultant based in Miami. After graduation from London Metropolitan University, she lived and worked as a music, art and culture publicist, journalist, and radio host and producer in Jamaica and the Bahamas. She is a contributing writer to ARTPULSE, ARTDISTRICTS, Rooms, MiamiArtZine and other local and international art publications, websites and blogs.