A CONVERSATION WITH JUMAANE N’NAMDI BY CHARLES MOORE 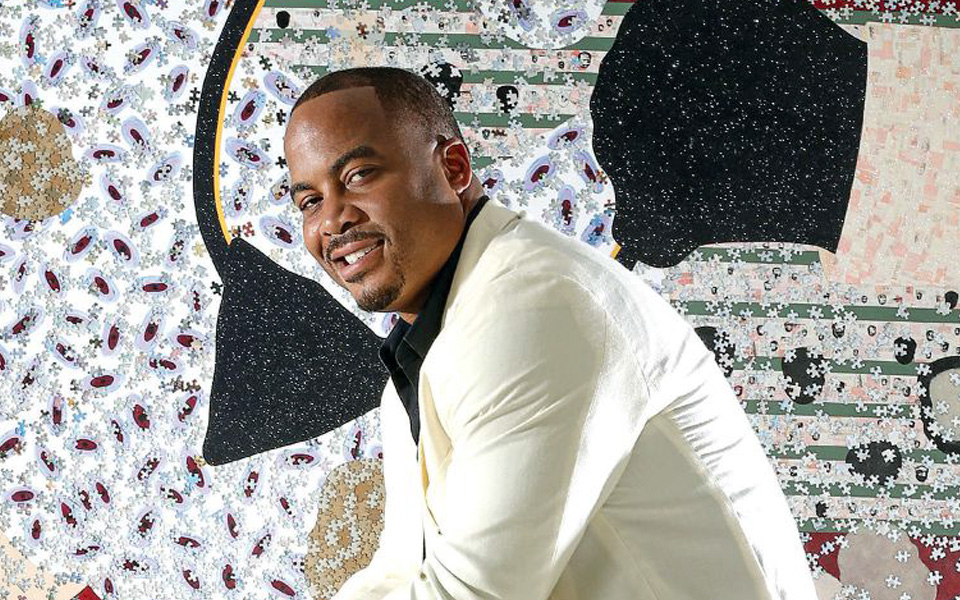 Jumaane N’Namdi, director of the N’Namdi Contemporary Gallery, grew up immersed in the art world. The second-generation gallerist launched his career in Chicago (1997-2012), expanded to New York (2001-2009), and since has put down roots in the Little Haiti neighborhood of Miami (2012). I recently had the opportunity to sit down with him at the Princeton Club in New York City and learn more about his trajectory.

“I grew up in the gallery,” explains Jumaane N’Namdi.

Pausing for a moment, the gallery director adds, “I played hide-and-seek behind sculptures, and these great master artists—meeting them and just having them around—all this was very normal to me.”

The art dealer’s father, George N’Namdi, a former developmental psychologist, switched gears and launched his own Detroit gallery in 1981. From an early age, N’Namdi spent a great deal of time in the business. He watched his family accrue an expansive art collection and witnessed first-hand the power of the artist-collector relationship.

Yet N’Namdi didn’t always set out to live his father’s legacy. Initially, he was going to be a teacher at Nataki Talibah Schoolhouse of Detroit, the institution founded by his mother,Carmen. He also thought about being a music producer. But after graduating from Morehouse College in 1997, he moved to Chicago and launched a career in the arts.

“It was like, how do I keep the legacy alive?” he says, reflecting on his decision from 20-some years ago. “So, I started slowly collecting art, and cultivating emerging artists and new collectors.”

N’Namdi remembers his early days with striking clarity. He can recall seeing Robert Colescott at a gala one evening, and immediately building a collection of his vibrant canvases. He was the first to show the work of conceptual artist Rashid Johnson—back when Johnson was still a student at Columbia College Chicago. And of course, his relationship with the late,renowned abstract painter Ed Clark ran deep. 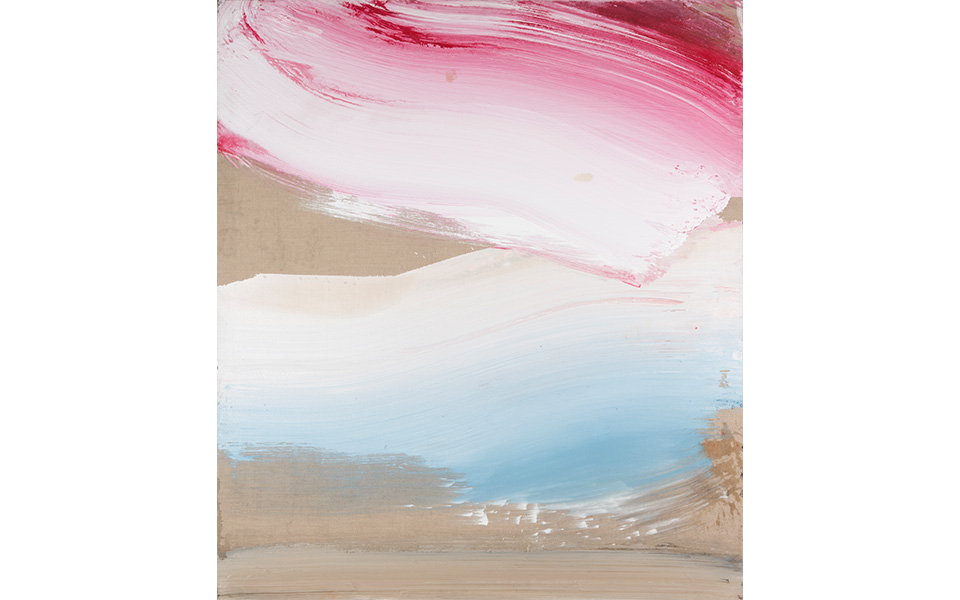 The N’Namdi’s created a market for Black artists and collectors when few looked at this group, and they helped cultivate artists by engaging with prominent public and private collections on a national and international level.

“I would go to [Clark’s] studio, and he would just sell me stuff,” says N’Namdi. “We had a relationship where my job was to make sure he is never forgotten.”

Today education, culture and aesthetics are at the core of the N’Namdi’s work. The gallerist has made it his purpose to preserve cultures instead of simply transacting art pieces. To this end, he wants his artist-collaborators to experience full creative freedom.

“Make whatever you are going to make,” he says, directing his statement at the up-and-coming artists he shows. “I am never going to tell you what to do.”

This is a rarity from an art gallery, and I feel confident it’s one of the many reasons N’Namdi has found such marked success.

But in the dealer’s words, artists need room to grow. They need room to embrace the delicacy of their art, evolve from their past work, and experiment with the ideas they find most significant. N’Namdi hopes that by giving emerging artists a space in his gallery, he also can offer them a home. A safe haven, if you will, to work in an uninhibited fashion.

This is because, according to N’Namdi, it is only by breaking the barriers to true freedom that young artists can preserve their culture. And only by preserving it in their work can they share it with the world.

“The money is not that relevant,” N’Namdi elaborates. “It is nothing compared to what art is worth in the brain. That is why Black collectors are so important to a culture—because you want future generations to know this is what you’ve got.”

The gallerist, who may well be the only second-generation African American art gallerist in the United States, considers it vital that we give both Black artists and Black art collectors a voice. He is working tirelessly to ensure these groups are heard.

Among the emerging artists he’s most excited about right now are Stephen Arboite , a first-generation Haitian American who got his start in New York and lives in Miami; Rashaun Rucker, who works out of Detroit and whose recent solo exhibition was critically acclaimed. And Ambrose Murray, the self-taught artist who recently was awarded the prestigious Fountainhead Residency. 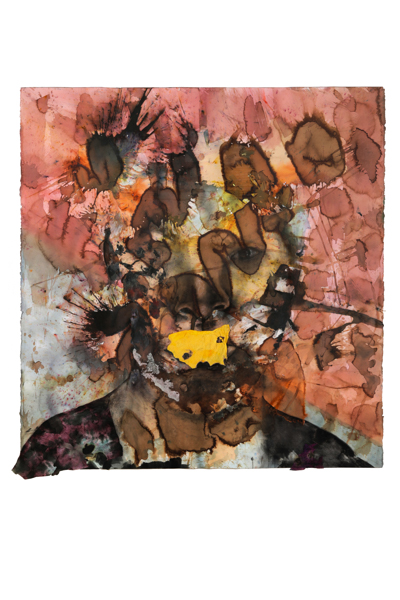 Arboite’s work is nothing short of striking. The artist takes a unique approach to painting, pouring coffee on canvas, moving it around and creating intricate forms. He incorporates collage into his process and has experimented with both faces and abstract forms over the years. Talking with N’Namdi about this rare find, I can tell the art dealer is impressed. N’Namdi appreciates that Arboite has taken the idea of artistic freedom so literally.

“I’ve bought pieces from Arboite before,” begins the gallerist, “and later, I find he’s cut them all up. But that is cool, because I want him to have that freedom.”

And then, of course, there’s Rucker. The multi-talented artistrecently completed a series entitled Pigeonholed, which showcases the parallels he’s observed between AfricanAmerican men and pigeons. The remarkable series explores the notion that both pigeons and African Americans were brought to the United States by Europeans in the 1600s—and while many have since migrated, not all of them understand their origins.

During my conversation with N’Namdi, I made a mental note to research Rucker in more detail once we parted ways. I immediately found that Rucker’s work is just as thought-provoking and transformative as I expected; it captures the viewer’s eye in a way that commands one’s full attention.

“When we look at art, we are not looking at who we think is going to be hot,” N’Namdi explains. “It is never that. Instead, it is always, who is changing art? Who is making you think beyond what’s already out there? Who looks like they could influence the next generation?”

Future generations, the gallery director explains, are essential. For instance, though he has stated he believes he has a better eye than his father, he also attributes his discerning taste to his father. Rather than reinventing the wheel, N’Namdi believes future generations are well-equipped to—in his words—“put some rims on it and make the wheel better.”

“I can tell my daughter will have even better ideas,” he adds. “You see, artists and art collectors are the royalty of a culture. And our royalty is not just Jay-Z, Beyoncé or famous royalty—but also all the people behind the scenes who are making sure the art and culture are being preserved.” 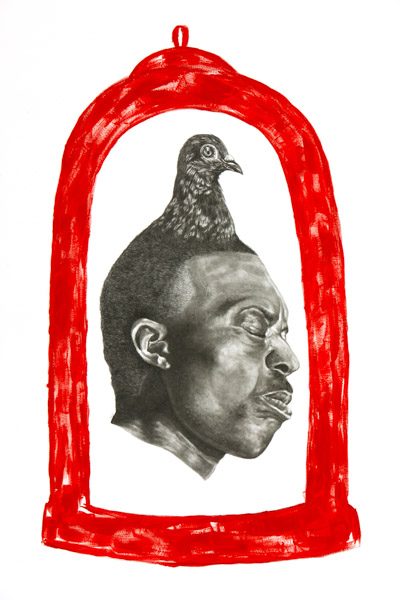 Moving forward, the gallerist will continue exploring the works of emerging artists—but he also is open to other possibilities in the creative space. Most recently, he hosted the Emmy award-winning PBS program, Art Loft. N’Namdi has had the unique and rare opportunity to interview up-and-coming South Florida artists, collectors of fine art, museum directors, and others in the region. The show has a substantial impact on artistic audiences, and even has given viewers a “backstage pass” to international events like Art Basel.

“It was really just kind of a light-hearted way of me doing something else but still being in the arts,” N’Namdi admits. “It’s cool because I came to Miami, opened a gallery, and then started doing a TV show. I already felt at home, but Art Loft really was like the icing on the cake.” Now he’s producing his own show called, Your Art Guy.

Ultimately, N’Namdi enjoys living in Miami so much that he finally got a Florida driver’s license. For the first time since college, he said goodbye to his Michigan ID and has truly embraced his home base.

Jumaane N’Namdi has a vast appreciation for the arts. The gallery director, who lives with his wife and young daughter, has spent the last two decades working closely with museums like the Art Institute of Chicago, the Detroit Institute of Arts, The Smithsonian, The Studio Museum of Harlem, and many others. Today his Miami gallery features monthly group, solo, and traveling exhibitions, and offers private international art consulting services.